Do Birds Pee,the answer lies in the fact that birds, unlike mammals, don’t produce urine. Instead they excrete nitrogenous wastes in the form of uric acid, which emerges as a white paste. And uric acid doesn’t dissolve in water easily.

Have you ever seen a bird urinate? Probably not. Instead, you’ve probably noticed that birds frequently release white, watery droppings with dark pieces in them. You might have even assumed that this substance is excrement – or poop, in layman’s terms – but you would only be partly correct. Read on to find out whether or not birds pee, how they excrete waste from their bodies, and what it consists of.

Technically speaking, birds do not pee. Instead, birds excrete urine in a solid uric acid form along with their poop. If you’ve seen a bird poop, then you’ve also seen it pee. 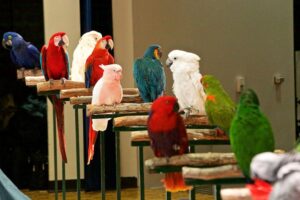 When mammals like dogs release liquid waste, which is referred to as urine, it’s usually pretty obvious. Mammals have urethras, or tubes, which run from their bladders, and they eject urine from their bladders through their urethras and out their urethral openings. Solid waste, which is known as feces, is eliminated separately.
Birds are different. Unlike mammals, they don’t have urethras, urethral openings, or, in most cases, bladders. Here’s a quick breakdown of avian anatomy as it relates to waste elimination:

Do birds have kidneys?

Kidneys play a crucial role in keeping our bodies healthy. They do many things to ensure our bodies functions properly. Their main job is to cleanse the blood of toxins and transform waste into urine. So, do birds have kidneys?

Birds have paired kidneys that play a vital role in the health and well-being of birds. They are responsible for purifying the blood and passing waste products out towards the cloaca, maintaining water and electrolyte balance in the body, amongst many other things.